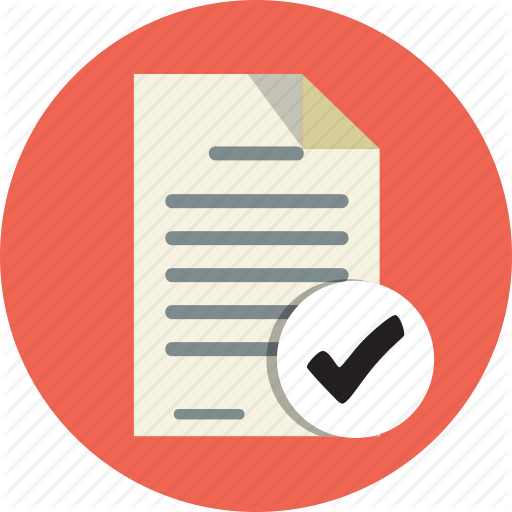 We'll FIFA 19 Dataset from Kaggle which includes thorough information about the FIFA19 game. The data was scraped from https://sofifa.com/. There are +80 features per player, including attributes (eg: shooting, passing, defending skills, value & wage, release clause and others).

For a detailed description of the columns of the datasetcheck the associated notebook Columns detail.ipynb

This is an example of the page that was scraped to generate the data: https://sofifa.com/player/158023 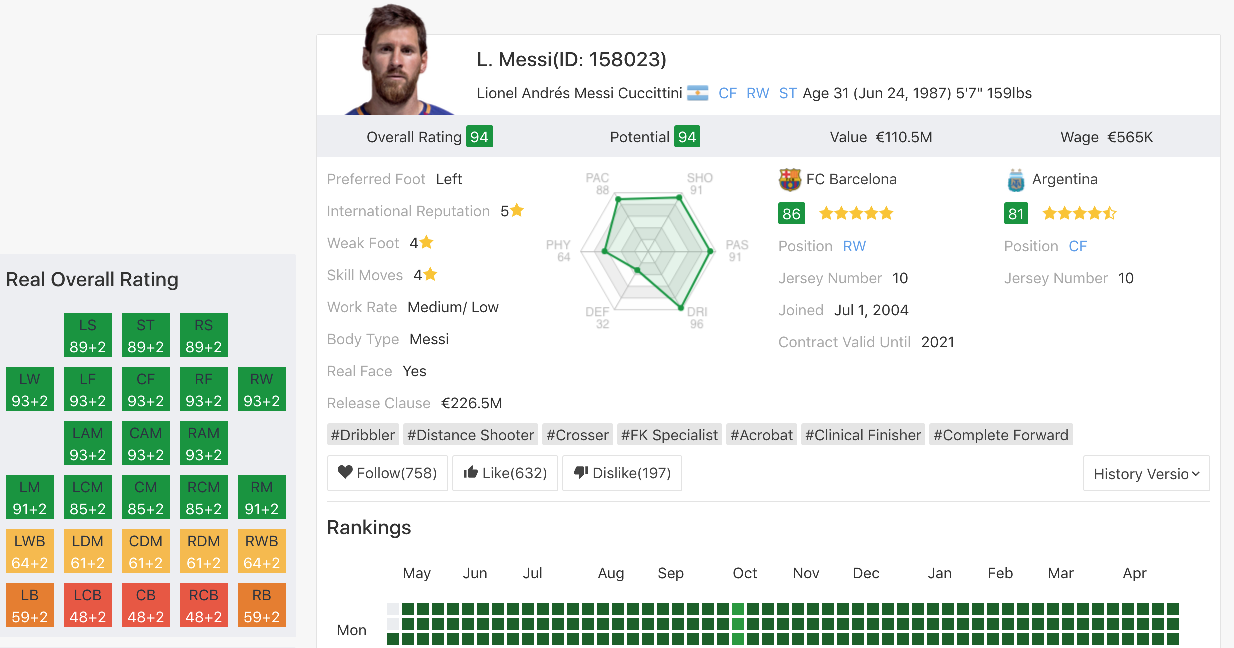 The data is contained in /data/fifa19.zip. There are 89 columns in the dataset. There's a detailed description of it in the associated notebook Handout instructions.ipynb.

This dataset is fairly well structured and cleaned, but there are still some tasks to do. We'll give you a few initial pointers to get things started, and you can finish the process according to your own criteria.

1. Parse Value, Wage and Release Clause to make them numeric:¶

The SimplifiedPosition column should have the position of the player simplified into the possible values:

3. Parse Joined and Contract Valid Until to Timestamps¶

Remember to use the pandas function pd.to_datetime().

4. The rest is for you to decide¶

There might be more things to clean from this dataset. If you find some other things to improve, please document them to present it to the rest of your classmates.

The analysis phase will include a couple of predefined questions given by us, as a way to get things started. We estimate these predefined questions should take around 30% of your time, the other 70% is more "exploratory", in which you're in charge of coming up with questions, findings and conclusions.

1. Which are the 10 highest paid players¶

To kick things off, we'll start with a simple one. Identify and plot the top 10 highest paid players, defined by Wage. Here's an illustrative example:

Some players have a low market value, but they have very good salaries, for some others is the other way around. Some clubs will prefer to pay a high value, but have less weekly wages.

Create a regression plot comparing Value to Wage. Can you tell which players are "cheaper" compared to their salary or the other way around? 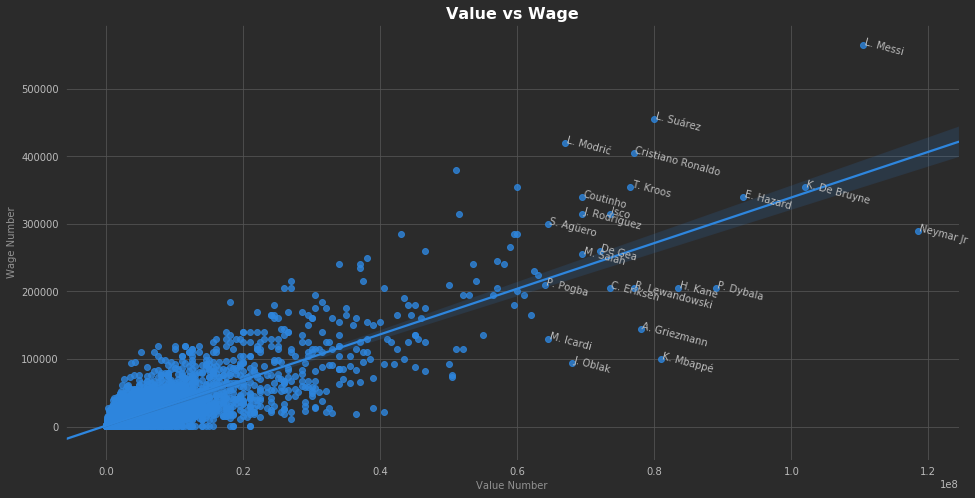 Create a figure to relate the value of a player with it's "overall rating". You can use a simple scatter plot or more advanced analysis as the one below: 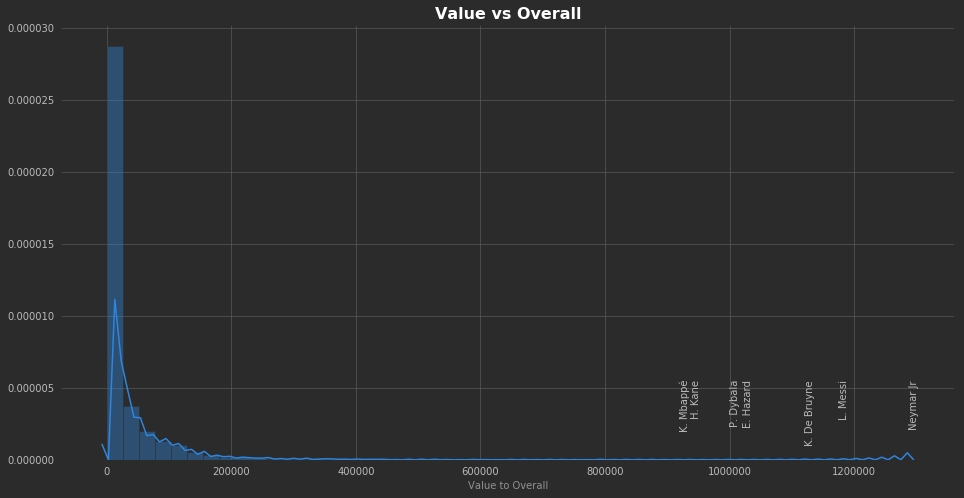 4. What are the top 5 most "valuable" nations?¶

What are the top 5 nations for which the sum of players value is the highest? 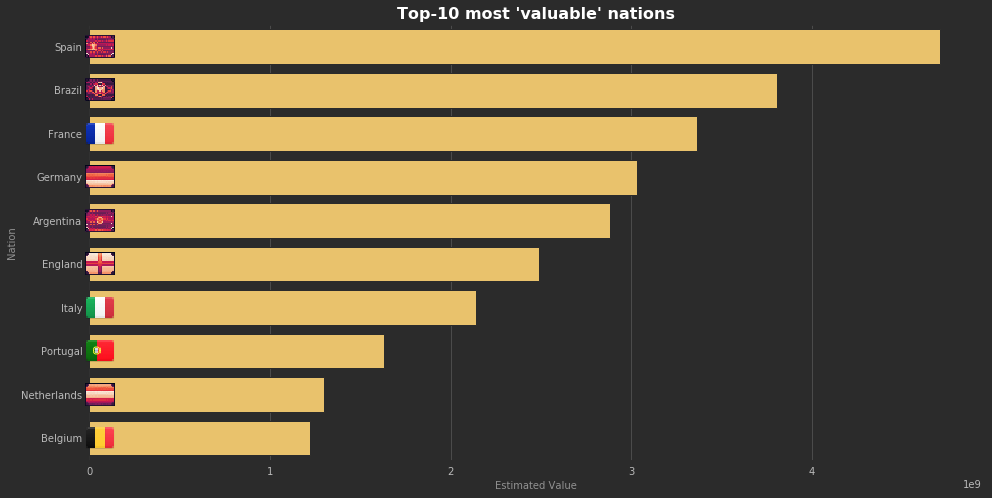 Calculate the total value of each club, defined as the sum of each players total value. Display the top 5.

6. Most valuable clubs on the 90th percentile.¶

7. What players have the highest potential to grow?¶

The column Potential shows the Maximum overall rating a player can reach (with the correct training). Overall shows the current rating. We'll define "Growth Potential" as Potential - Overall. For example, Vinícius Júnior has an Overall of 77, but a potential of 92. He has 15 points to grow. What are the 10 most promising players? Defined as the ones with highest "Growth potential".

8. What are the top 5 most promising players, with a potential over 90?¶

Similar to the previous point, but the players with a potential over 90.

9. What clubs have the most number of loaned players?¶

Some clubs loan more than others. What are the top 10 clubs with more loaned players?

10. Create a Radar chart with the most important features of the player.¶

A Radar or Spider chart lets you plot multiple features at the same time. Define a function plot_radar(player_names, features) that receives players and features to plot and create radars: 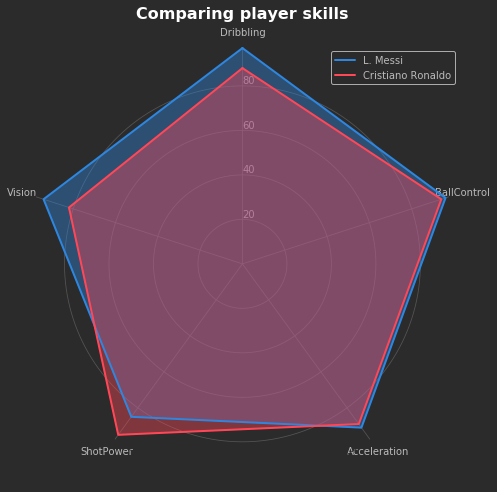 11. Create a correlation heatmap of the most important skills of players.¶ 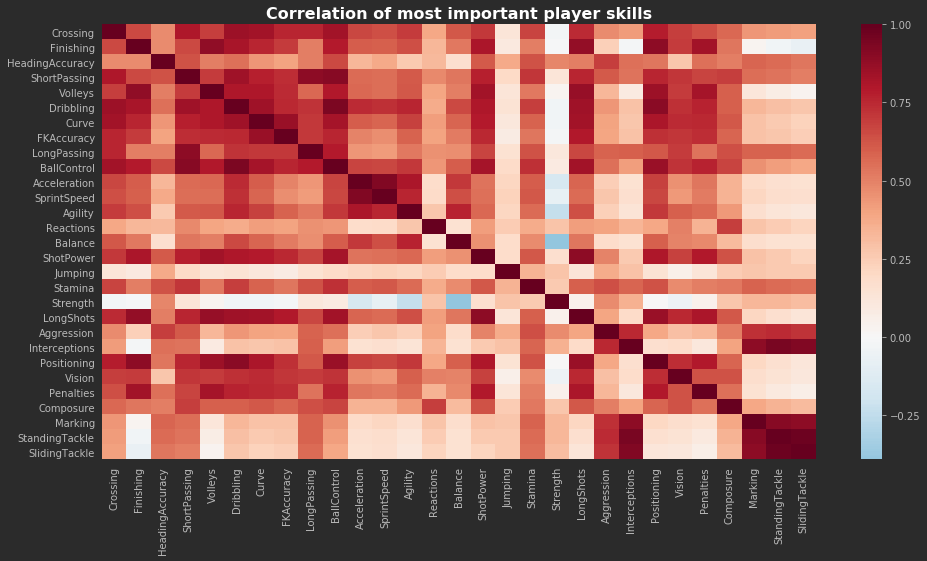 Now it's time to continue with your own EDA. There are multiple things to analyze, as correlations, anomalies, etc. This is your time to shine ✨!

Time for some Machine Learning! We'll give you a recommendation of the easiest thing to predict, which is the Overall value of a player. If you want to create other models (example: classifying the SimplifiedPosition, or estimating the Value/Wage), you're welcome to do it.

Create a model that predicts the overall ranking of a player. What are the most relevant variables when comes to predicting that overall value and why?

Finally, if you have extra time, here are optional points to work on:

Some players have their Position missing. The https://sofifa.com/ website has positions for them, so it's probably just the result of poor scraping. Use your scraping techniques (beautifulsoup recommended) to fill those missing positions.

2. Create an API endpoint to predict a players overall¶

Using the regression created in the previous point, create a simple API endpoint that receives the features you're analyzing and predicts the overall value of the players.